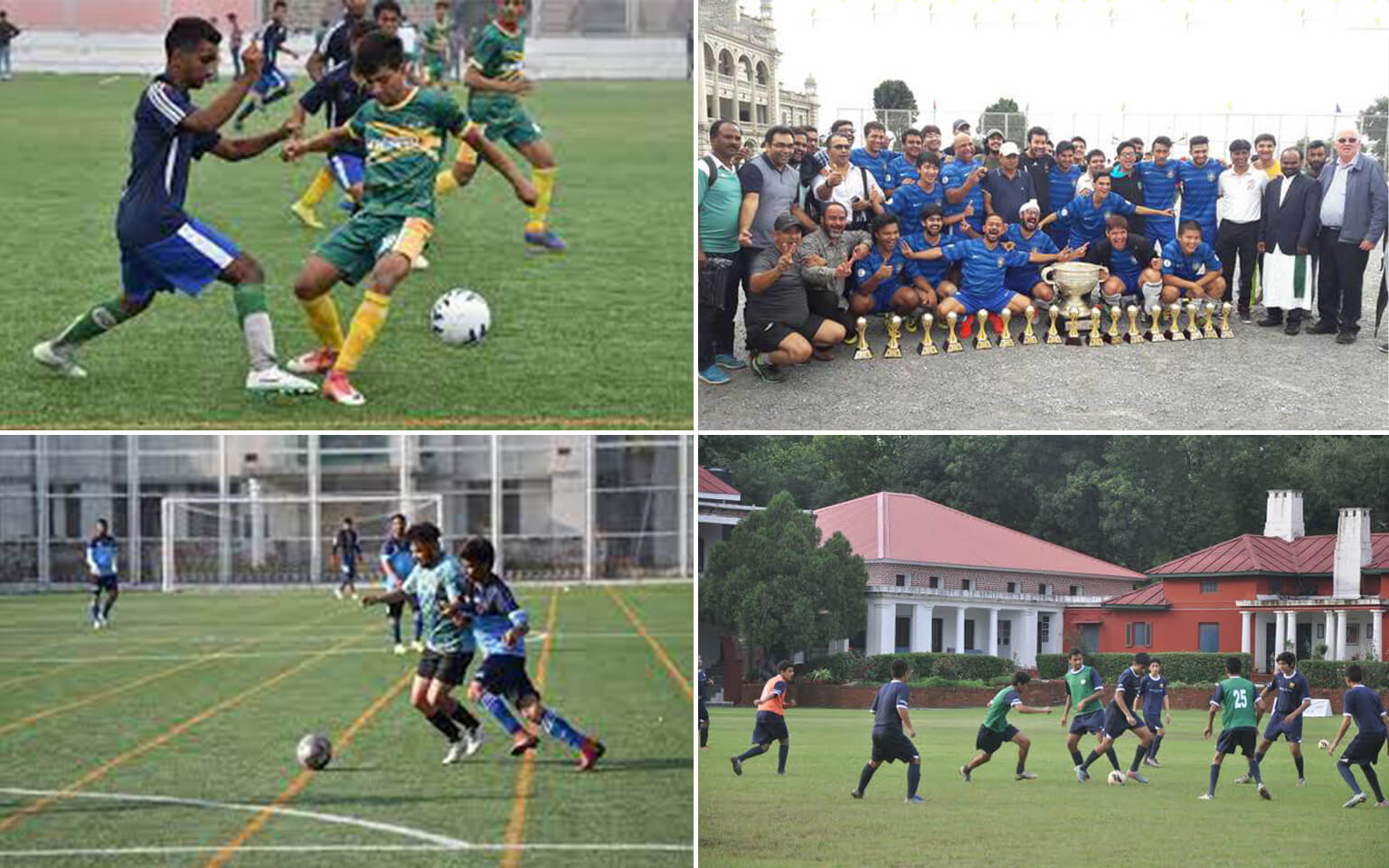 “You will be nearer to heaven playing football than studying the Bhagavad-Gita. “  – Swami Vivekanand 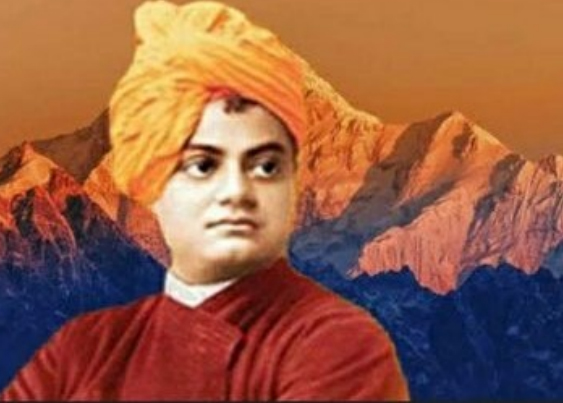 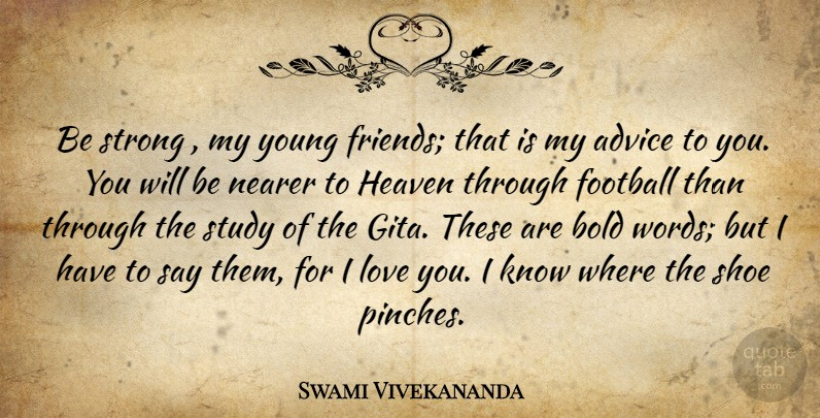 Quite a few people may have been baffled by this remark.  Actually, the Swami was addressing a young, sickly-looking lad who wanted to acquire spirituality by studying the immortal classic and had come to the hero of the Chicago World Parliament of Religions to guide him. What Swami Vivekananda in effect was trying to advise  the boy was that first he to ought to improve his health, become strong in body and mind in order to imbibe and translate into his life, the bold message of the   Bhagwad Geeta, Song Celestial.

Soccer/futbol is called the beautiful game because it gives you a feeling of joy and passion.

It teaches you to really learn to trust and encourage people. You have 11 people on the starting team, so if 10 are playing well and 1 player is having a bad game you have to rally around the struggling player. It was popularised by the Brazilian footballer Pelé, although the exact origin of the phrase is disputed. Stuart Hall, an English football commentator, used it as far back as 1958. Hall admired Peter Doherty when he went to see Manchester City play at Maine Road and used the term “The Beautiful Game” to describe Peter Doherty’s style of play. 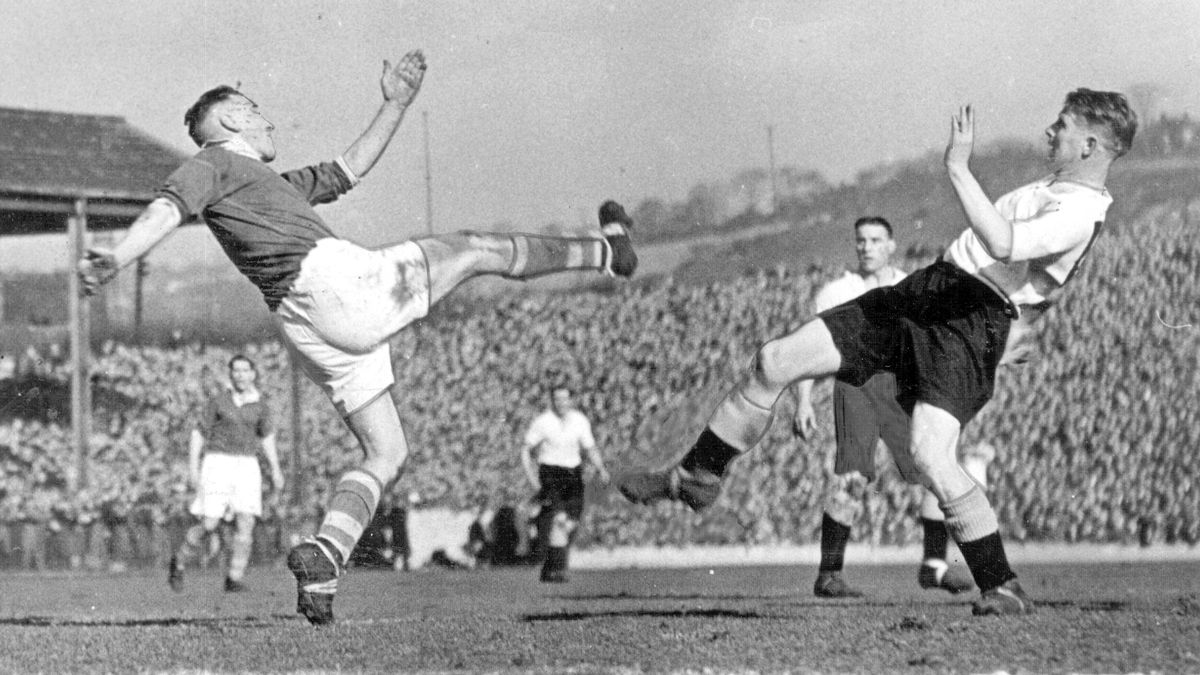 The sad part of Sunil Chhetri’s appeal is that the Indian football team skipper, with close to 25 lakh followers on various social media platforms,
had to plead with these “fans” to come and fill what is a tiny, 7000-seater football stadium in Mumbai.
https://youtu.be/S2wK-p3uSM8

Fans  Chants of ‘INDIA….INDIA’ filled the Mumbai Football after.
Sunil Chhetri asked India ‘To come to the stadium’. And the Fans Did Not Let Him Down. They thrashed Kenya 3-https://youtu.be/Sn_go8Px-tQ 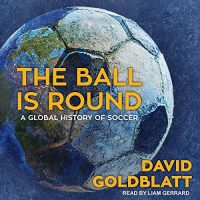 There may be no cultural practice more global than soccer. Rites of birth and marriage are infinitely diverse, but the rules of soccer are universal. No world religion can match its geographical scope. The single greatest simultaneous human collective experience is the World Cup final.

In this extraordinary tour de force, David Goldblatt tells the full story of soccer’s rise from chaotic folk ritual to the world’s most popular sport-now poised to fully establish itself in the USA. Already celebrated internationally, The Ball Is Round illuminates soccer’s role in the political and social histories of modern societies, but never loses sight of the beauty, joy, and excitement of the game itself.

Uttarakhand government declared football as a state game in 2011

It is affiliated with the All India Football Federation.

1. not everybody is aware of this
2. its not very popular
3. the UK teams is not bringing home trophies. 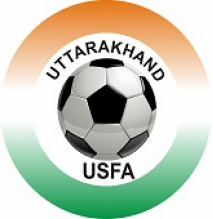 Dehra Dun had everything going for football to flourish : Public schools and the passionate football British then Indian Army Gorkhas. In the 60s and 70s it was on the list of premier football centers of India. The dazzling performance by the Gorkhas and the Gorkha Military School forced many football experts to declare Dehra Dun as the second football centre of India, after Calcutta. The football teams of the Doon valley brought fame for the place 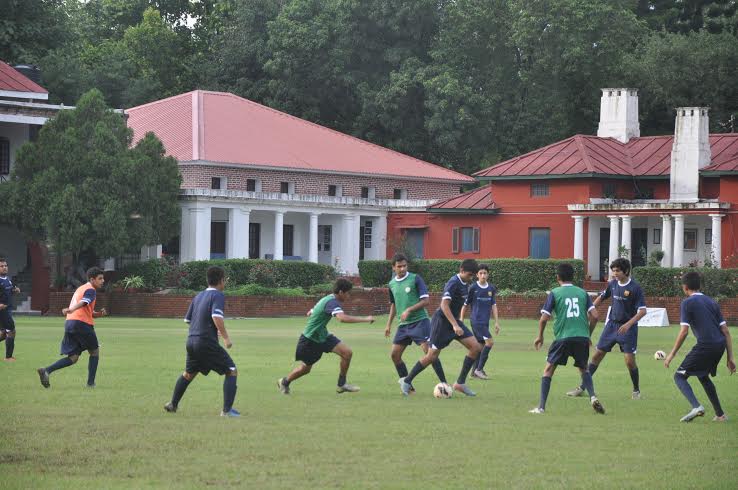 Some 20,000 football lovers purchased tickets to watch the Mohammedan Sporting versus 5/8 Gorkha match of the Nagarpalika All India Football Tournament in 1975. The sight was mind-blowing with such a huge crowd! The Pavilion has not recorded such crowd ever,” recalls RM Jindal, a former football player and DDSA official. The Pavilion Ground, located in the heart of city, has remained a testimony of rise and fall of the Doon football. The history of the Pavilion Ground could be traced way back to 1939

The history of soccer in Doon can be traced way back in the mid of the 18th century when this “game was played by the British troops stationed at Chakrata and Dehra Dun”.

Football gained so much popularity after1911 in the Doon valley that when Prince of Wales (later Edward VIII) came here to inaugurate the Royal Indian Military College (now known as the Rashtriya Indian Military Academy) in 1922 one of his engagements included felicitating an army football team.”

“The year 1937 saw the formation of the Dehradun District Sports Association (DDSA).

The association started hosting a district football league in which local football clubs, central government institutes and army teams began to participate thus giving a boost to the game here.

From 1950 to 1970 belonged to Doon football. The Army teams, posted here at that period, in particular boosted the standard of the game with their splendid performances at the national level tournaments.”Dehra Dun became one of the major super powers on Indian football in 1966, when the Gorkha Brigade won the Durand Cup defeating the Sikh Regiment 2-0. Reporting about the final The Times of India, 12 January 1966, edition wrote, “Sikh Regiment Centre, Meerut, made it a tough and honorable fight all the way, but had to bow to the inevitable and scoring once in each half, Gorkha Brigade lifted the handsome Durand Football Cup for the first time at the Corporation Stadium today.

The Junior Subroto Cup was started in 1960 and Dehra Dun junior teams reached the finals of this national school football tournament seven times from its inception to 1972.

No local football lover will forget 1970 as the Subroto Cup final turned out to be an all Dehra Dun affair.

The overall standards of football at the school level was simply outstanding with public schools like the St Joseph’s Academy, The Doon School, St Georges College (Mussoorie), etc giving top priority to football.

The Gorkha centres were transferred from Dehra Dun in 1976 : a serious blow to football in Dehradoon. Jyothi FC broke the jinks in 1976. Ratan Thapa registered first title victory abroad, in Nepal. But after the Birthday Cup victory a long wait started and it still continues.

Uttarakhand should desperately and dedicatedly boost its State Game… Now.

If I ask you who is the Captain of the India football team, you or many may not know. But almost every Indian
from 6-96 knows who the capt of the india cricket team. How to make our football champs of the beautiful game popular,
rich glamourous and role models. The best answer will get a specially designed sweat shirt and a hand painted football poster…

Ruskin Bond : “A lot of people think I am a good writer and praise me, but no one praises me for being a goalkeeper and in this book, I am going to praise myself as a goalkeeper. “ He added that he has continued being goalkeeper and “defended” his home 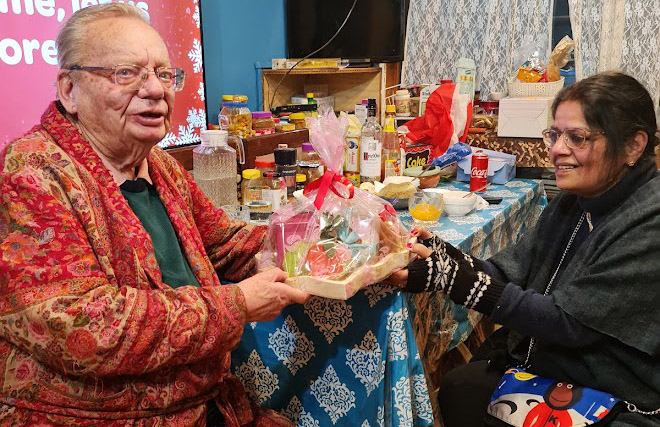 For Ek Tha Rusty season 1 we did our shooting for  the football sequences in St George’s College, Mussoorie 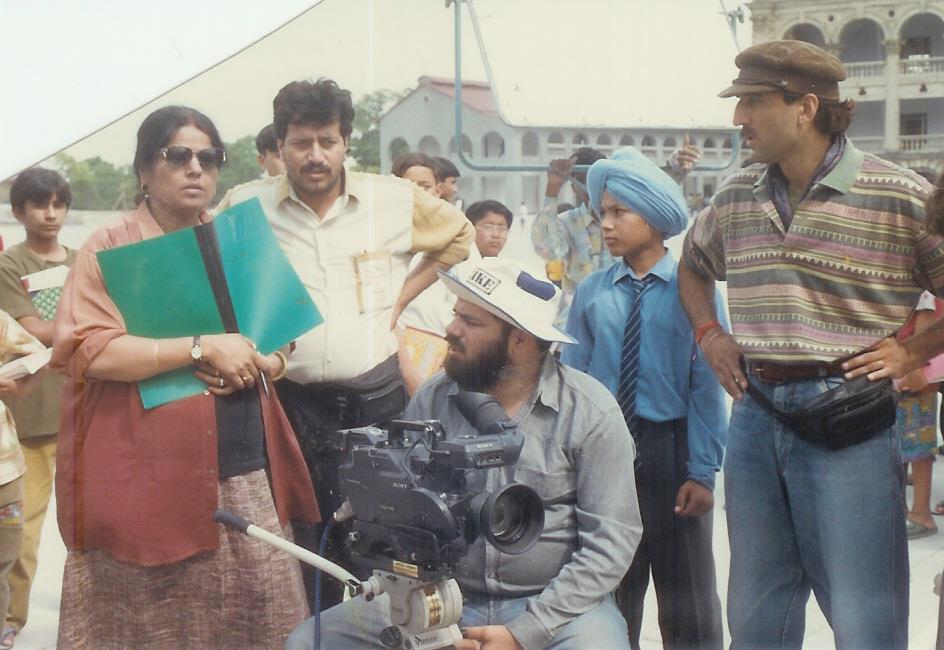 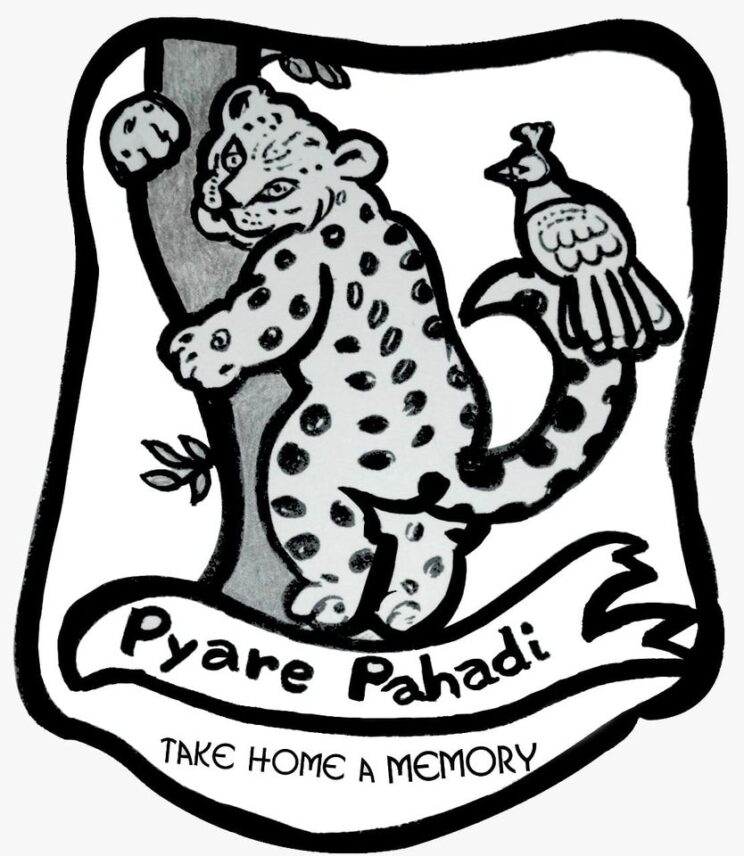